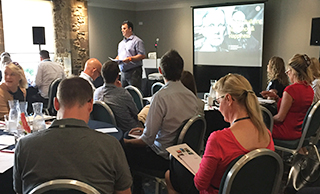 Back in July 2019, the engage in their future National Conference travelled to the Crowne Plaza Hotel in Stratford Upon Avon where delegates enjoyed a programme of keynote talks and workshops around the theme of ‘Engaging With Our Behaviour … Building Resilient Communities’.

Having welcomed guests and provided an outline of what they should expect over the next day and a half, Chair of engage in their future Toni Munoz-Bailey handed over to Laura Drury from Laughology to deliver the opening keynote around ‘Building Resilience and Happiness’. This interactive session encouraged delegates to get up on their feet, challenged their thinking around how happiness can be used as a coping strategy and to build resilience, and awarded prizes for the most amusing (or thoughtful!) answers to Laura’s questions. As one delegate said, “Funny, interesting – perfect start!”.

After a quick refreshment break, delegates dispersed to the various syndicate rooms for the first of three workshop sessions. Delegates were able to select from a choice of four options ….

Donna Murray from Te Ara School in New Zealand invited delegates to “Walk In My Footsteps” as she shared her personal journey through New Zealand’s education system. She drew on her first hand experience of how the Maori population were historically treated, the cultural impact this has had, and how this influenced her decision to go into teaching.

‘Positive Behaviour Support – past, present and future. Our journey so far’ was the focus of the workshop from Barrie Campbell and Sarah Ayache from The William Henry Smith School. For some, this session provided a useful insight into how another setting has established this provision, whilst for others it provided useful advice and examples that they could take away and use back in their own school as they move through or consider a similar process.

With many years of experience to draw on and retirement from his current role on the horizon, John d’Abbro from New Rush Hall School is uniquely placed to reflect on ‘40 Years in Our Sector: what has and has not worked for me’. With so much to share, the experience and advice that John imparted was useful and relevant to everyone, regardless of their own term of office, background or current job role.

PDA was a subject addressed in a keynote during the 2017 conference but such is its continued importance that it was the focus of the workshop from Daniel Hunnisett from High Grange School this year. Daniel’s exploration of the topic specifically focused on ‘Supporting Students Experiencing PDA’ and provided delegates with ideas that could be taken back to school to share with and support colleagues.

With the workshop sessions over, delegates returned to the main conference room to hear the second keynote talk of the day. Bernard Allen is always well received and his session on ‘Tempering Anxiety and Building Self-Control’ was no exception. With a clear link to the conference theme, delegates were once again impressed, with one describing the talk as “very informative and thought provoking”.

The first day of the conference closed with regional meetings followed by the AGM. At the latter, it was confirmed that several individuals would be standing down from their current role either due to a change in personal circumstances or because they had reached the end of their term of office: Toni Munoz-Bailey (Chair), Sue Asher (Treasurer), Brendan Heneghan (Secretary), Richard Boyle (South East Regional Representative and Vice Chair), Mary Rayner (East Regional Representative).

Members subsequently agreed to the introduction of a new Co-Chair arrangement to lead the National Committee and duly elected Sue Ackroyd and Richard Berry to the roles. In addition, Mel Marris came forward to fill the role of Secretary, and Tania Craig to take on the role of Treasurer.

Day two of the conference was opened by Jonathan Cobb from Te Ara School in New Zealand. Jonathan spoke about ‘engage in their future and Activity Centres New Zealand: A Hikoi / travelogue and a partnership’. He explained about the education system in New Zealand and, more specifically, the provision for children and young people facing SEMH challenges, and how with support and input from engage in their future, they are working with the Government to establish a thriving SEMH education sector.

The programme then launched straight into Teach Meet. This session exemplifies the concept of sharing good practice is a highlight of the conference programme for many delegates as they get to hear colleagues share their ideas and experiences, providing invaluable tips and advice. These are all delivered within a two minute window, strictly enforced by compere Larry Bartel!

Delegates returned to the room after a refreshment break to hear the closing keynote of the conference. ‘It’s Time to Take the Far Right Seriously’ was the advice from Nigel Bromage from Small Steps, an organisation established to provide support and training to counter far right extremism. Speaking from personal experience, he urged delegates not to under estimate the threat of the far right and explained many of the tactics that they employ to recruit and radicalise.

The conference was then closed by Toni, although many delegates chose to stay on to enjoy lunch and continue to network with colleagues.

The 2020 National Conference proved to be another successful event, delivering a relevant programme of high quality keynote speakers and workshops, and encouraging networking amongst colleagues from across the country.

Would you like to learn more about the benefits of membership?